Quick Shop is now available to watch for free on YouTube:

File this one under better late than never 🙂

Quick Shop is now (and has been for a while now) available on IndiePix.net for the low, low price of $1.99.

Quick Shop has been accepted into the 2013 Greater Lehigh Valley Filmmaker Festival and will be screening at the 8:00 PM block on Thursday, October 31st at the Frank Banko Alehouse Cinemas in Bethlehem, PA. It doesn’t get any more local (for me) than this, and the venue is a top-notch, stadium-seating theater…the perfect environment to see Quick Shop in what will likely be its last theatrical showing. More information can be found on their web site:


Once again, Quick Shop is in the running for the “Best Short (Under 15 minutes)” award…so come on out and show your support! There will be a Q&A session with the filmmakers after my block, and with a good crowd it should be a blast. It’s been a wild ride and I’m really looking forward to this screening.

And the winner is…Quick Shop!

Great news everyone…Quick Shop won the “Best From the Valley” award at the 2013 Movies at the Mill Film Festival in Easton, PA! 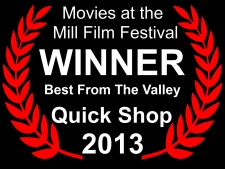 The festival was very well attended despite the rain. I had a chance to meet the very nice  Gershon Hinkson, who ran the festival. I also attended a seminar that afternoon held by none other than Morgan Spurlock, which proved to very informative and entertaining. You can check out some pictures from the event on my media page.

After watching all of the movies, Mr. Hinkson announced that Quick Shop had won the “Best From the Valley” award, and asked me to come up and say a few words. As I was in a bit of shock I don’t remember exactly what I said, but I know I thanked everyone who helped make the film, and gave a special shout-out to John Cronk, who attended the festival with me and stuck it out to the bitter, rainy end…even on his 40th birthday.

So needless to say I was ecstatic that Quick Shop had won its second award. And again, I have to thank everyone involved that made Quick Shop a reality. I couldn’t have done it without you, and you should be proud of what we’ve made and what we’ve accomplished.

Posted in Quick Shop News | Comments Off on And the winner is…Quick Shop!