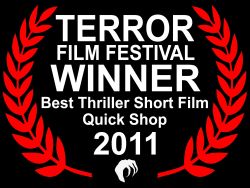 This win is huge for me, but it also could not have been possible without all the help from every single talented person who donated their time and effort in order to make Quick Shop a reality. This is your award too, and if I receive a physical trophy of some sort, we can take turns keeping it at each other’s houses 🙂

As for the Terror Film Festival itself, I was able to attend the screening on Friday night (luckily before the snowstorm hit us on Saturday). The people at the festival were very nice, and the screening had about 20-25 people in attendance. After watching the block of films, myself and two of the other filmmakers took to the stage and had great Q&A session with the audience. At the end of the Q&A the festival director gave away three Quick Shop posters to audience members, which I signed for them. I had also brought a couple copies of Quick Shop on DVD, which I gave away to a couple of people who expressed interest. I also signed those…the whole autographing experience was a bit surreal 🙂

The cool thing was, I actually had people approach me and tell me they liked my film. That’s a really great feeling, and really validates all the effort that was put into the movie. To top off a great festival experience, I learned that Quick Shop had won the Best Thriller Short Film award. I am humbled and honored that Quick Shop was chosen as the winner, and it certainly motivates me to continue making films.

I have a few pictures from the festival that I will post as soon as power is restored at my house. Until then, I will relish in the win and continue to promote Quick Shop!

This entry was posted in Quick Shop News. Bookmark the permalink.